The second year of the Ouachita Highland Games at Cedar Glades Park attracted more participants, vendors and spectators this year, according to one of the organizers.

Stacy Green, the games’ athletic director and two-time world champion, told The Sentinel-Record on Saturday’s second day of matches that they surpassed the numbers for 2021 matches.

“So far so good. We’ve had great weather, so we’re very happy with that. We’ve got a really big crowd, a lot bigger than last year,” Green said, noting the event drew competitors from six different states.

The games were moved to March this year to avoid the warmer temperatures of last September, when highs were in the 80s to 90s. The weather last September was “pretty warm”, Green noted. While the weather cooperated for this year’s games, Green said “we were lucky this weekend because you know what it was like last Saturday it was 33 degrees so next year for sure , we’ll talk about it with everyone, we’re probably looking at moving it to April or May next year, just to hedge our bets against the weather.”

The games are hosted by Gates Family Entertainment, the same group that hosts the annual Hot Springs Renaissance Faire.

Green said there were nine different events at the games ranging from Scottish Hammers to Stones for distance and they had bigger competitors this year.

“We’ve got a really big and strong Class A so this year the crowds are going to see things thrown further than they did last year the big guys everything they do will be bigger than last year,” he said.

“I think word of mouth and the fact that we were able to do a decent one last year” contributed to the increase over last year, Green said, noting that a conflict scheduling with another show in Ohio prevented this one from being even bigger.

“Arnold Schwarzenegger had his big Arnold Show this weekend in Columbus, Ohio, and it’s like the biggest thing going, so we actually lost four athletes, who I know would have been here today. today, world champions, who went to compete in the Arnold, which I can’t blame them for,” he said.

Many participants in the inaugural games last year were first-time competitors. Green said: “Just our local team from Hot Springs to Little Rock, I think 80% of the rookies are back here today, and then we have at least a dozen new rookies competing here today as well. “

“I think it’s wonderful,” said Miranda Brewer, one of last year’s competitors. “It was a great turnout. We have at least 60 different competitors in all the different weight classes and divisions.”

Brewer began training last April. After two games, she said she was “hitting PR, which is a personal best, and that’s pretty much what everybody’s looking for is to hit PR”.

“I think everyone is having a wonderful time,” Brewer said, and urged those interested in the sport to give it a try.

“Come to one of our practices and see if you would like to throw objects,” she said.

Anna Galbraith said she came back to competition because “I had a lot of fun last year and I kind of wanted to see if I could do something better than last time, but I have a little shoulder injury I work with.”

Kathy Lenahan competed in her third Highland Games. Explaining the appeal, she said, “staying active, the community. I love bringing my kids and getting them involved, and just living a healthy life with fun people.”

Lenahan praised the Ouachita Highland Games, noting, “I think it’s great, I think it’s fun. I think it’s well run, I love the people who come to support the community, and it’s only their second event, so I think things are growing very well.”

One person who attended games before but made his Ouachita debut was Sean McConnell.

“So for me, I didn’t start until I was 40. I already had a different background in athletics. I was a varsity cheerleader after getting injured in high school, playing football/wrestling , it didn’t happen that way, I got hurt, I had to find something else,” McConnell said.

“After he graduated, I got into pro arm wrestling. I broke that arm in half, look at the beautiful scar, in the finals of a state championship competition. I took about a year off, in rehab and I wasn’t ready to give it up as far as competing and needing anything,” he said.

“More than anything, I love the physical aspect, the mental aspect, the friendships, all together it’s physical health, it’s mental health and it’s just one big community,” McConnell said. .

After seeing photos from the 2021 games, he said he wanted to travel to Hot Springs from his hometown of Sperry, Oklahoma. “I saw pictures and I just saw beautiful scenery and I said, you know, this must be a game I have to come to.”

Another first-time contestant who discovered the games by seeing pictures online was Drake Wallace.

“I actually just saw the Facebook post about a month ago and thought ‘I’m going to do this,'” he said. “I love it, I’m having a blast. My last name is Wallace, there’s Scottish heritage there, and I just saw that, so that’s the main reason I came to do it. “

While he “hit the gym for more powerlifting stuff,” Wallace said he didn’t do any real event training for the games.

He said he intended to continue attending the games, noting, “Oh yeah, I plan on trying to do three or four events a year, if I can find them.”

Miranda Brewer competes in a hammer throw during the Ouachita 2022 Highland Games at Cedar Glades Park on Saturday. – Photo by Tanner Newton of The Sentinel-Record 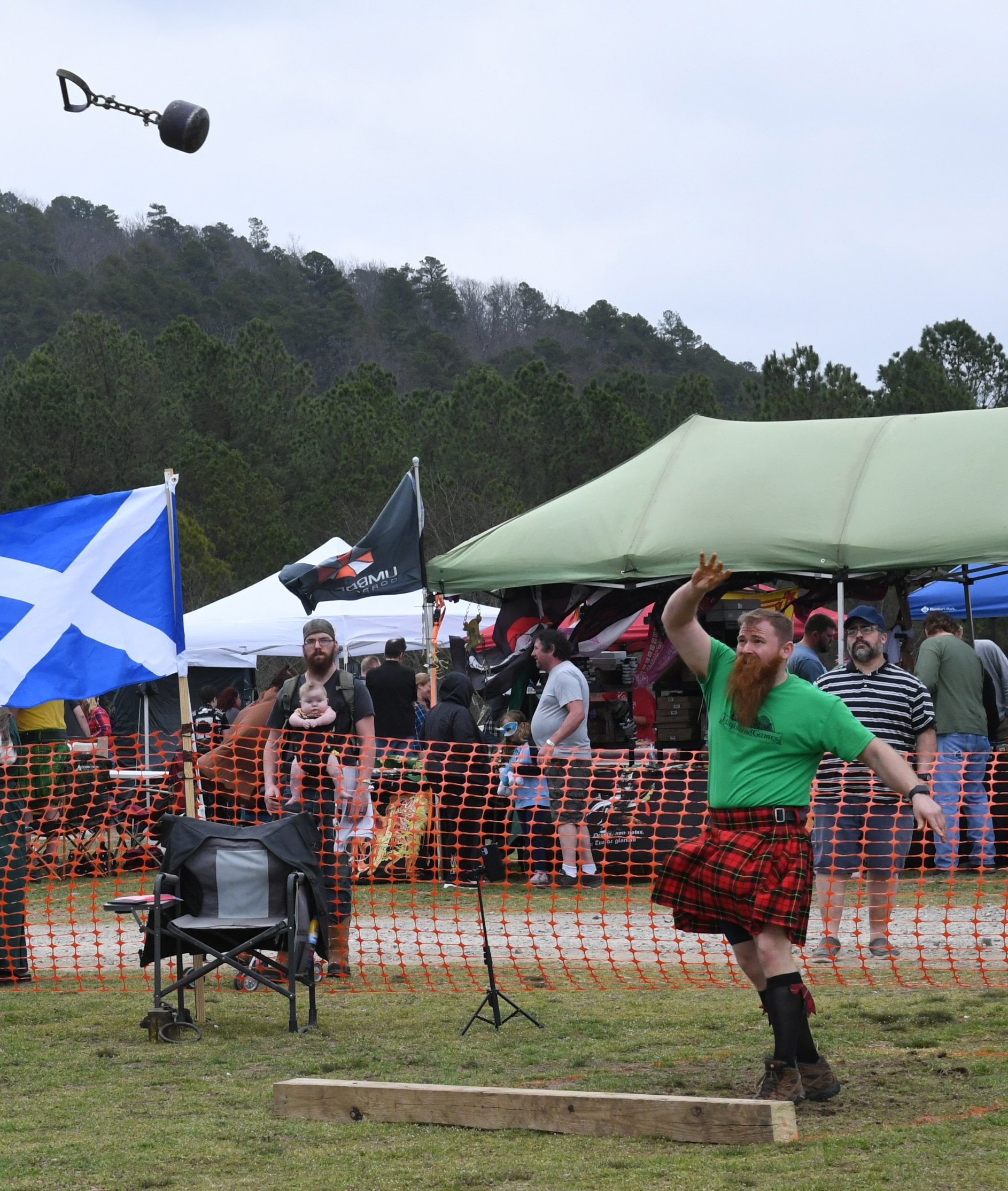 Drake Wallace of Paragould competes in a shot put during the Ouachita 2022 Highland Games at Cedar Glades Park on Saturday. – Photo by Tanner Newton of The Sentinel-Record

Tickets for the Inverness Highland Games are now on sale

27 stunning photos capturing the best of the Ceres Highland Games