CHOOSE ME—Above, a 7-year-old Chihuahua waits to be adopted at the Camarillo Animal Shelter on Aug. 23. MICHAEL COONS/Acorn Newspapers

Above all, they want to find homes for some of their oldest residents, including 6-year-old Rookie, a brown pit bull terrier mix who, despite his playful nature, has been at the shelter since February 2021.

And then there’s Otter Pup, another brown pit bull terrier mix who’s been at the shelter for over a year. He is described as “a very nice dog with a lot of energy”.

Clear the Shelters is an annual national pet adoption and shelter donation campaign led by NBCUniversal Local and Telemundo in partnership with local shelters and animal rescues. Since 2015, the Clear the Shelters campaign has helped over 500,000 pets find new homes. 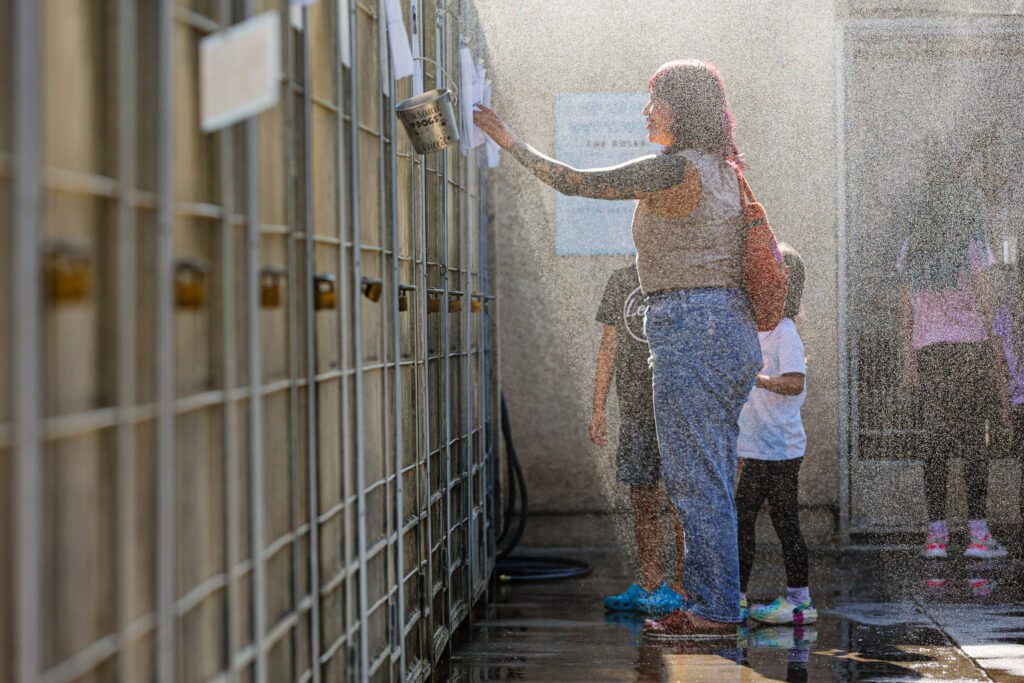 Naomi Hernandez of Oxnard and her two children, Dominic, 7, and Luna, 5, watch the dogs up for adoption as the shelter’s mister keeps the animals cool. Photos by MICHAEL COONS/Acorn Journals

“We are thrilled with the Clear the Shelter event,” said VCAS Director Jackie Rose. 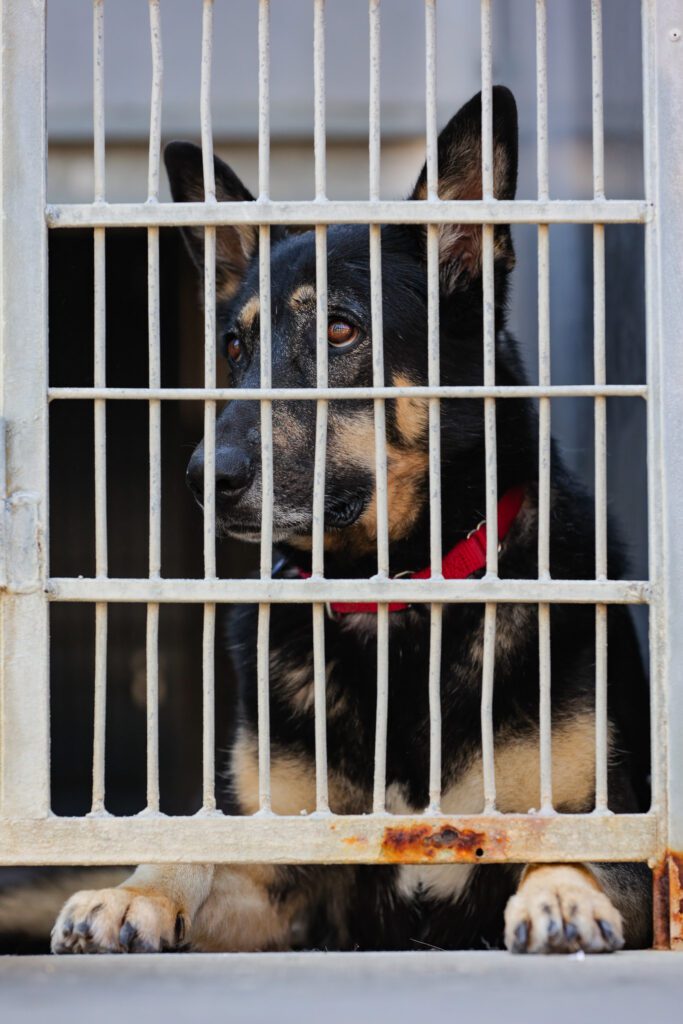 Bella, a three-year-old female German Shepherd, is waiting to be adopted at the Camarillo Animal Shelter on Aug. 23. MICHAEL COONS/Acorn Newspapers

Rose said the VCAS chose to return to a large one-day event this year because it had been so successful in 2019 before the COVID-19 pandemic.

As of Monday, VCAS had more than 228 animals at its Camarillo shelter and another 23 at its Simi Valley shelter, 670 W. Los Angeles Ave.

Another 236 animals are in foster care, she said. Most foster animals are kittens from a busy season. Of the more than 485 animals in the VCAS system, 130 are dogs and 48 are rabbits.

Other animals are also available for adoption, including a pot-bellied pig named Piggums, a rooster named Thoreau, and an as-yet-unnamed chameleon.

The number of animals at the shelter fluctuates constantly, but has hovered around 500 in recent weeks due to the influx of animals that arrived after July 4 and those that escaped while their owners were on vacation and have not been recovered. 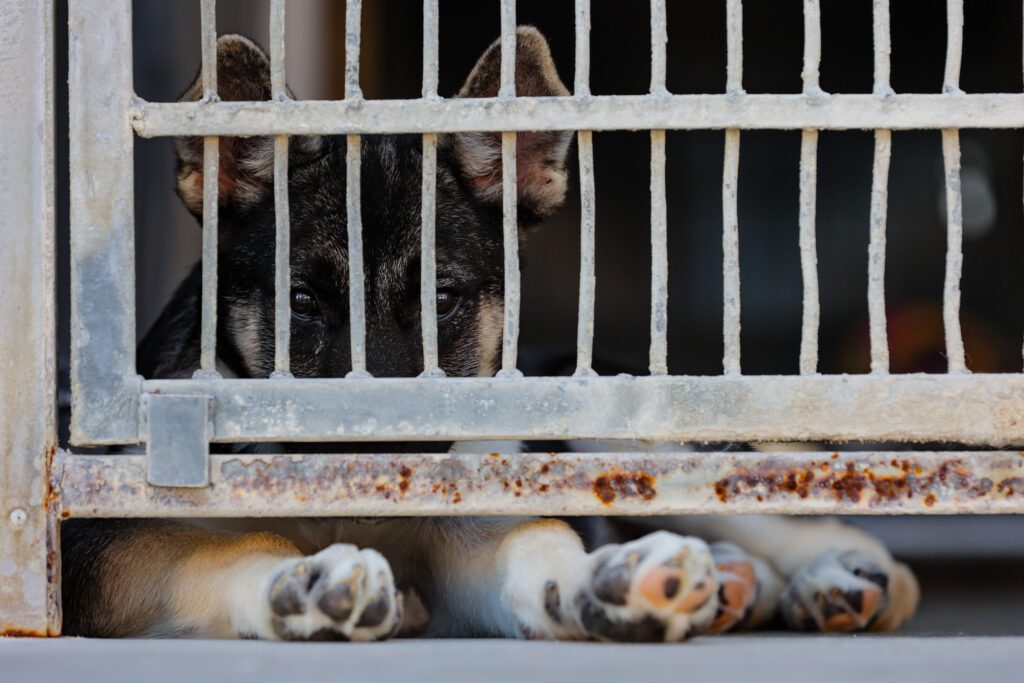 A four-month-old German Shepherd waits to be adopted at the Camarillo Animal Shelter on August 23. MICHAEL COONS/Acorn Newspapers

“We really hope that many of these animals still at the shelter will find their forever homes on Saturday,” Rose said.

She said more than 60 volunteers will be on hand today to help regular staff members and ensure adoptions go smoothly and quickly.

Shelter managers recommend that potential adopters decide in advance what type of animal will best suit their lifestyle and family. They should consider whether this animal would be compatible with other pets and children in their home. Where they live, whether it’s an apartment or a house, a rural area or a suburb, also makes a big difference.

“If you have a dog that barks a lot, it might not be the best dog in an apartment complex,” Rose said.

Rose said potential adopters should also consider the type of maintenance the animal will need and the type of animal that fits their lifestyle.

“If someone comes in and says they want to take the dog hiking, biking, running and going to the beach, but they fall in love with a 14-year-old dog who doesn’t move very well, that might not suit their expectations,” she said.

“They are like having a cat, they are litter trained. They are very affectionate. They make great pets,” Rose said, although she advised against having rabbits around a dog that has prey.

Rose encouraged people to look at residents of their special case, meaning animals that are neglected, like Rookie and Otter Pup.

Sometimes these dogs are overlooked because they look like all other dogs, are older, or have behavioral issues that need to be addressed.

“Sometimes finding the right home for this animal is a bit difficult, but we know someone is out there to adopt these guys,” she said. “We encourage everyone to come see some of the animals we have, and maybe someone will touch their hearts and want to bring them home.”

Sugar Land animal services workers have been fired after 38 cats and dogs were improperly euthanized at an animal shelter since April, the city says