The 34 lucky dogs who arrived in the United States earlier this month have come a long way since our animal rescuers first encountered them as victims of South Korea’s dog meat industry. South.

In July, I told you about 21 dogs, whose fate was uncertain after government authorities shut down an illegally operating dog meat farm in Ansan City, Gyeonggi Province. Just days before the start of Bok Nal, which marks the hottest days of summer between July and August when eating dog meat is most popular, Humane Society International/Korea and Korean partner organization K9 Rescue took in these animals and placed them in care. . The dogs were quarantined and received veterinary care, vaccinations and socialization. 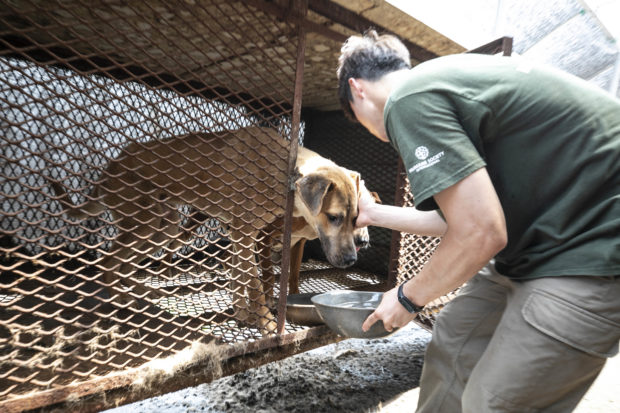 Today, 19 of them are at our Animal Care and Rehabilitation Center near Washington, DC, where they receive additional care and social enrichment on the next leg of their journey to loving homes. . With them on their trip from Seoul were 15 survivors of the dog meat industry from other farms and dire situations who also got a chance to start a new life. Soon, very soon, they will be enjoying a new life with caring families, not just survivors of a trade that claims the lives of an estimated 1 million dogs a year in South Korea, but ambassadors of the proposition that no dog should die for this trade. . I couldn’t be more grateful that we were able to help them. As for the two dogs from Ansan who remained in South Korea, Hazel and Lucy, they gave birth to puppies after their rescue, puppies who, fortunately, will never experience the horrors of the meat trade. They will all fly off to new futures once the puppies are old enough.

Our approach to ending the dog meat industry in South Korea and elsewhere is cooperative, and we have helped shut down and remove animals from 17 farms and rescued countless others working closely with our animal welfare partners in Korea and local authorities, and by helping farmers transition to new livelihoods that do not involve the suffering and slaughter of animals.

And we also win in the court of public opinion. A 2022 poll by Nielsen found that 85% of Koreans have never eaten dog meat or have no intention of doing so in the future, while 56% would support a government ban on the practice.

South Korea is not the only country where the battle to end the dog meat trade is taking place, and we are actively working with our partners in other countries, including Vietnam, Indonesia and China. , where a tragic incident involving a “death truck” occurred. on October 1 near Yulin. There, 370 of the 1,408 dogs and cats crammed into a vehicle perished. The shocking images from the scene are a stark reminder of the terror, misery and desperation of the dog meat trade, and the amount of work ahead of us in our global campaign to end it.

All the more reason to take comfort in what is happening in the lives of newly arrived dogs. The comfortable surroundings of a rehabilitation center are a far cry from the sterile confines of a cage on a dog meat farm, but it’s still early in the process of their incredible transformation from forgotten victims of a brutal trade to beneficiaries of the better than the human-animal bond can produce. I am thrilled on our part to secure their path to safety and happiness. I hope that you too.